GASTAT Board of Directors Appoints Two New Vice Presidents and Assigns Al-batel as a Special Advisor. 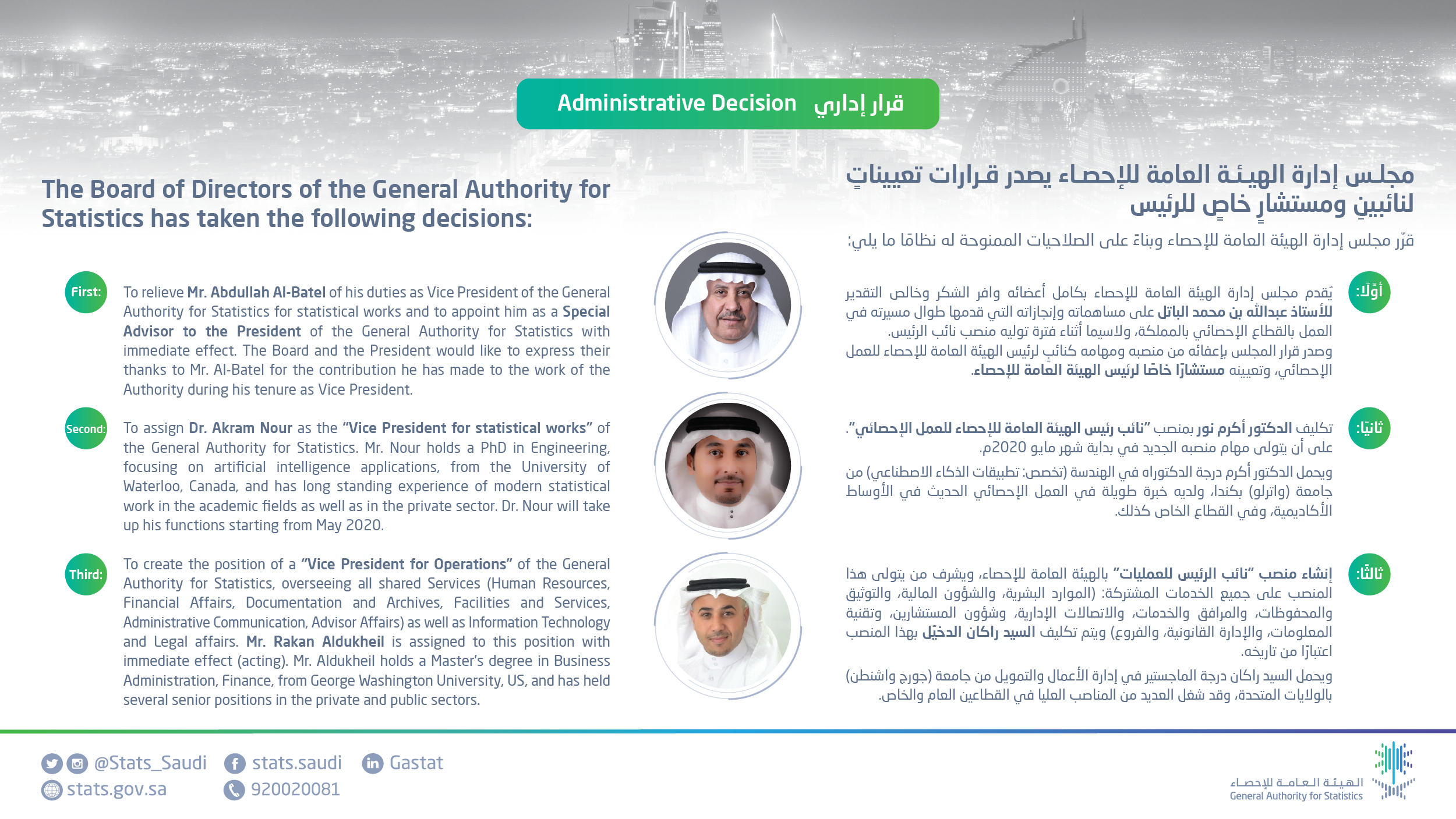 GASTAT Board of Directors Appoints Two New Vice Presidents and Assigns Al-batel as a Special Advisor.

The General Authority for Statistics’ Board of Directors Chaired by His Excellency Minister of Finance and the acting Minister of Economy and Planning Mr. Mohammed bin Abdullah Al-Jadaan, issued its decision to relieve Mr. Abdullah bin Mohammed Al-Batal from his position as Vice-President of the General Authority for Statistics for statistical work and to assign him as a Special adviser to the President of GASTAT. The board and the President express their thanks and gratitude to Mr. Abdullah bin Muhammad Al-Batel for the contributions he has made during his tenure as Vice President of GASTAT.

The board also issued its decision to appoint Dr. Akram Nour as the "Vice President for statistical works" at the General Authority for Statistics. Dr. Akram holds a Ph.D. in engineering, with a focus on artificial intelligence applications, from the University of Waterloo, Canada, and has a long standing  experience in modern statistical work in the academic field as well as in the private sector. Dr. Akram Nour will take up his duties starting from May 2020.

Moreover, the board issued its decision to create the position of "Vice President for Operations" at the General Authority for Statistics, which supervises all shared services (human resources, financial affairs, documentation and archives, facilities and services, administrative communications, consultants affairs), in addition to information technology, legal affairs, and branches. The board appointed Mr. Rakan Al-Dukhiel in this position effective April 6, 2020. Mr. Rakan holds a Master’s degree in Business Administration and Finance from George Washington University in the United States, and has held many senior positions in the public and private sectors.

It is worth mentioning that the decisions issued by the Board of Directors of the General Authority for Statistics come based on the powers granted to it. This decision by GASTAT’s Board of Directors is to stress on efforts made towards achieving The National Strategy for Statistical Development that was approved by the Cabinet of Ministers in 2019. This strategy seeks to develop and enhance the statistical work in Saudi Arabia, and ensure its sustainability in providing accurate statistical data at the right time that can be available to researchers, decision makers, and investors. This will achieve the collaboration that is compatible with the data and information policies in Saudi Arabia, that attains a high level of transparency and integration, and fulfills all efforts related to the statistical field.