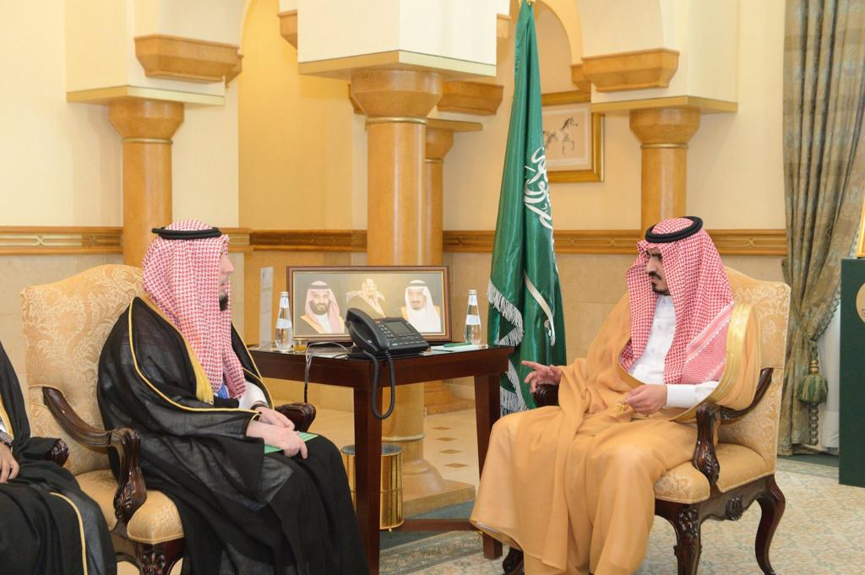 H.H. Deputy Prince of Makkah Al-Mukarramah Region received in his office at the headquarters of the emirate, the employees of the authority led by the supervisor of the Saudi Census 2020 in Makkah Al-Mukarramah Region Mr. Turki Al-Quraini and his Deputy Director of the authority’s branch in the region Mr. Osama Al-Subhi, in addition to a number of leaders of the census project in the region. He reviewed a number of important topics in the project and ongoing field work, stressing on the importance of the Saudi Census 2020  project and its role in supporting development in various areas of our dear homeland and what is reflected on Makkah Al-Mukarramah Region. They also discussed the importance of this in the quality of services provided in the region in general, and in the city of Makkah particularly, and for what concerns The Custodian of the Two Holy Mosques and his Crown Prince regarding the Holy Areas, to serve Islam and Muslims, and the quality of statistical data and information reflected in order to raise the quality of services for the Two Holy Mosques. His Highness also shed light on the importance of the project in light of the ambitious vision 2030 which is led by His Highness the Crown Prince, and what is reflected in this project to support the development wheel and the future that awaits all the precious regions of our Kingdom. This aims to improve services, quality and welfare for our homeland and citizens. He praised the General Authority for Statistics role in this project and a number of projects undertaken by it over the past period, noting everyone's role in responding and providing accurate information that achieves the desired goal by God's will.
Al-Quraini expressed his thanks and appreciation to the advisor of the Custodian of the Two Holy Mosques, Prince of Makkah Al-Mukarramah Region and his Deputy, for their efforts in supporting the Saudi Census 2020 project in the region by directing all government agencies to provide full support for the success of this important national project. He also presented to His Highness a summary of the implementation stages of the project in Makkah Al-Mukarramah Region, explaining that this census differs from previous censuses, being implemented traditionally and in a register-based method using the latest technologies in all statistical data, estimating the project participants number in the region up to 16000 sixteen thousand collaborators.
He praised the efforts of the local census committee in the emirate, and a number of memberships of general managers in government agencies. It is worth noting that the Saudi2020  census will include the survey of population, housing and establishments.
At the conclusion of the meeting, employees of the General Authority for Statistics presented a souvenir to His Highness, which is a logo model of the Saudi Census 2020.